Hey y’all, thanks for tuning in to another WordPress Wednesday.

Now, you might say right away, “I don’t tweet and I don’t even know what Periscope is.” Hang on a second; because, those two resources really can be something that’s gonna be incredible for your website to not only bring in a totally different user experience and engagement. But, also, the possibility of cool search engine optimization. A little SEO for your website.

So, check this out…

We have our most recent tweets happening here, which is very cool. This is how I’m saying you could use it potentially for SEO adding in that fresh content. This is very, very minimal and I’d like to see you do even more fresh content; but, if you’re active on Twitter, it’s kind of cool to have. Plus, did you know that there’s the possibility of linking your Facebook account with your Twitter account; so, every time you post on Facebook especially if you’re active, it’ll Tweet for you. Which is super cool.

So, if you don’t know how to do that, I’ve got a link to another video that I’ve done that will teach you how to do that and link those two accounts. I’ll put the link to that in the description box below. So, that’ll be kind of cool.

So, one of the plugins I wanted to mention to you is this plugin. It’s a free plugin to put into your WordPress website for Twitter. “Easy Twitter Feed” and I’ll just show you kind of briefly what it would look like once you install it.

This easily walks you through the steps of how to install it and how to
set up all the different elements that are needed to not only design the layout of how the feed is going to look; but, also how to link it with your actual Twitter account.

This is kind of how it will look. You’ll have the different layout option
of white versus darker and that’s pretty much it. It’ll bring in your feed. People will be able to click on it and bounce over to your Twitter account if you want them to.

But, remember, that most of these Twitter plugins are gonna require you to do a little bit of extra step with creating a developer API or creating some sort of a little bridge.

Now, if that seems too complicated, please don’t panic about it. Every single one of these plugin authors really, truly gives you awesome step-by-step instructions on how to walk through and do the installation process. So, you can look at it. It will tell you easily you can copy the widget from the browser bar. You can copy the widget i.d. That’s all you need is this custom widget i.d..

So, it’s easy enough to do and anybody can do that. So, check that out and, of course, there’s always the developer area for Twitter, if you’re struggling too much and you can always reach out to the individual plugins author. So, that’s correct on any plugin out there. The author typically has a support form or some sort of area that you can go to, to connect with them and ask your questions on maybe how to do some extra customizing plugin or perhaps even get it to work correctly on your website. So, connect with them on that.

And, let’s talk about Periscope.

What people are using this for is it’s live feed, so I could basically activate this free app, which is Periscope. It is owned by Twitter, now and you just start a video and you talk into it. You can walk people through an experience.

I’ve taken people into the San Antonio zoo here and just used my Periscope video the whole time, so they can just see all the monkeys and the lions, and our new giraffes that are there and you’re able to talk to people and they can hear you; but, you cannot hear them.

The way they engage with you, is they can do a quick text on the screen that will pop up and they’ll start to ask you questions.

It’s a really cool way of engaging. One of the other things that a lot of
people do with Periscope is a lot of the people in the news, news anchors, will allow you to have a behind the scenes view of them.

So, while they’re talking on camera they might have their phones set up
over here on the side, allowing you to see a behind the scenes view of what’s going on in the room. It’s pretty cool. That’s different user engagement that I’m talking about.

It’s free to use. It really has a very simple learning curve. You just basically hit “Start Broadcast” and it starts the broadcast. So, there’s a plugin, as well. This one is the overall official Twitter plugin. So, this will work for your Twitter feed, as well as for Vine and Periscope.

So, you can use this one. I’ll put the link to this in the description box below, as well. It’s pretty cool, though. It allows you to put
“Simple Settings”. Do you want a light theme or a dark theme? That’s your white or black. You’ve got the different descriptions of how it would look here. This is single tweet, single tweet with video. This is basically how it would play out in your website. So, that’s pretty simple to do if you’re wanting to go up, above and beyond, use WPSCOPE. Now, I’ve never used this before. It was recommended to me.

If y’all have used this particular system, WPSCOPE for Periscope, will you please mention if down in the comments below? Tell us if it was a good experience or a bad experience?

I’m not vetting these guys. I just heard that they’re the real deal
and that it’s used for Periscope.

So, “This is the most exciting opportunity in online video since the launch of YouTube and most marketers haven’t even heard of it yet!” and, that’s true.

If you’re trying to find a cool way of doing video, Periscope really is the latest and greatest way of doing that and it’s super simple and it doesn’t require any extra, huge expensive equipment. It’s just, right now, on your phone. You can download the app and get started.

So, if you have questions or other ideas about this social media specifically Twitter or Periscope, be sure to put those in the comments below so others can get some ideas from you.

Twitter, of course, you want to be using hashtags and if you don’t know what that is,that is next week’s topic. We’ll be talking all about what is a hashtag and how to find the right key words to use for hashtags.

I hope you’re having a great one. I will see you next week on WordPress Wednesday. 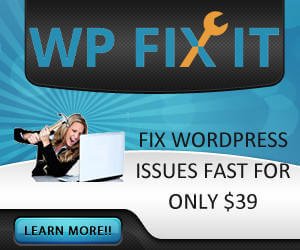